Chemistry, in front of and behind the camera, is key to magic of South African drama Desert Rose 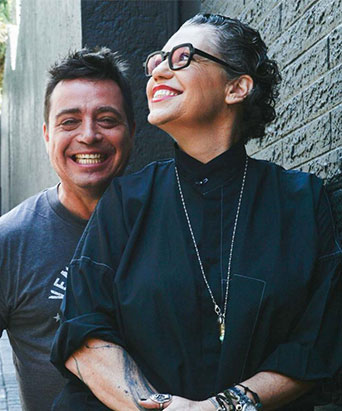 Much is made of the onscreen chemistry between characters in a movie, whether it is the relationship between romantic leads, family and friends or even between protagonist and antagonist. In many cases, that magical X-factor can make or break a production, adding the emotional authenticity that an audience craves when watching a show or movie. As important to the success of a show, however, is the behind-the-scenes chemistry between the principal creative team. It was this chemistry, according to creator and writer Rohan Dickson and director Cindy Lee, that was an integral part of the secret sauce behind M-Net's recent eight-episode series, Desert Rose.

Produced by Quizzical Pictures, Desert Rose tells a tale of family, crime, romance, humour and music through the eyes of the Greyling Family. It is an evocative and quirky drama about good vs evil, set on a Northern Cape farm called Desert Rose.

Both Lee and Dickson are represented by MLA, the largest artists’ agency on the African continent. They have a long history in television, although Desert Rose is the first time they are working together. Desert Rose is the latest series from Dickson who is an award-winning screenwriter and showrunner of shows such as Reyka, Husk and Welcome to Hawaii. While Cindy Lee’s previous long-form directorial outing was The Girl from St Agnes.

Fast friends even before production of the show began, Lee and Dickson’s connection and admiration for each other is evident as they talk passionately about their recent collaboration:

“I have had the pleasure of knowing and admiring Cindy’s work for many years, as well as being able to refer to her as a colleague” states Dickson. “When I was discussing possible directors for Desert Rose with the production company, her name was already on my mind as my top choice. I am glad that Quizzical wholeheartedly agreed and I pitched it to her almost immediately.”

“I, of course, have seen what Rohan has done on his other shows, including Reyka, and I love his work,” remarks Lee. “When he pitched me the idea over dinner, I was very excited. I read the script over the next 24hrs and was hooked.”

This mutual respect led to an intensely collaborative partnership during the eight-week shoot. While the screenwriter is not ordinarily present on set, Dickson was also a producer on the show. This meant that he was readily available to make any changes that were needed in order to translate his words into a visual world.

The show was in an isolated part of the country, which made for some interesting challenges. Amongst them, the crew had to contend with Covid restrictions and the usual tight budgets. This meant that they all had to be particularly adaptive in how they worked.

“It was so helpful to have Rohan on set to collaborate with and change things when they didn’t work or could, simply, work harder. And that flexibility of working was adopted by the whole cast and crew. We had a brilliant team, all of whom immersed themselves in the production and the story. There was incredible trust and that allowed us all to push ourselves and push one another. It was exhausting but exhilarating. By far the best on-set experience I have had," says Lee.

Another factor in the successful partnership was Lee’s approach to the material. According to Dickson, Lee showed a respect for the writing that is not always demonstrated by directors.

“Often, a director will want to change things up a bit so it fits into their idea of what should happen, Cindy respected the story and how it unfolded. Our ways of viewing the story came from different perspectives, but they complemented each other. I enjoy the poetic nature of writing whereas Cindy comes from a much more practical place, analysing the motivation behind every action and decision the characters make so that it makes sense not only on paper but on the screen. As a result, she was able to be true to the story and characters while weaving her own invaluable vision into it.”

Although the series was shot in a relatively short timeframe, and the process from pitch to commissioning was also unusually quick at three years, the chemistry and atmosphere of teamwork and respect that was a feature throughout the process ensured that the vision and integrity of the show was not compromised. The result is an engaging drama that is already proving to be popular with reviewers and the public alike.