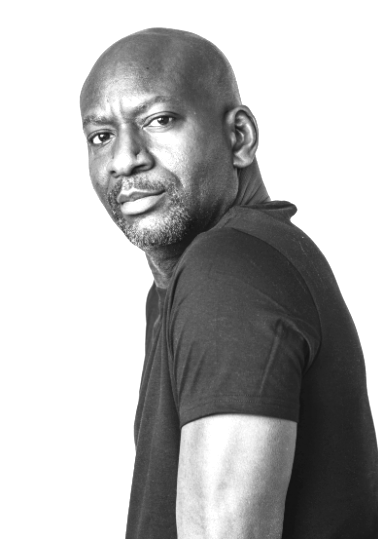 Akin Omotoso (born 1974) is a Nigerian-born South African actor, writer and director best known for his role as Khaya Motene in the SABC1 soapie Generations. He also had starring roles in the SABC3 soapie Isidingo and the e.tv sitcom Big Okes.

Born in Nigeria, Omotoso grew up in the university town of Ife where he found his first love, writing. In 1992, his family moved to South Africa after his father (Bankole Omotoso) accepted a lectureship at the University of the Western Cape. Akin completed his A-levels in South Africa but struggled to get into university without a matric exemption.

He enrolled for the only course at the University of Cape Town that did not require a matric exemption, the Performers Diploma in Speech and Drama. He originally intended to do drama for a year but continued with the course before launching into the acting profession.

His career plans were turned around after he was cast in Sunjata, a play directed by Mark Fleishman. He won The Fleur du Cap Award for Most Promising Student in 1995 for his role in the play and decided to pursue a career in the performing arts. Using money he made from acting to subsidise his directorial feats, he completed three short films: The Kiss of Milk, The Nightwalkers and The Caretaker.

In 1999 he wrote his first feature film, God is African. He struggled to find funding and at the suggestion of his leading actor, Hakeem Kae-Kazim, he made it a low budget film. Shooting was done at night because everyone on set had day jobs.

When God is African premiered in 2003, Omotoso was struggling with the personal loss after his mother died from cancer. He decided to reprioritise his life and started a production company, T.O.M Pictures with Robbie Thorpe and Kgomotso Matsunyane. The company's first project was producing Craig Freimond's film Gums and Noses, which went on to win Best South African Film at the New York Independent Film Festival in 2004.

Akin Omotoso directed another short film called Rifle Road which was selected to be screened at the Cannes Film Festival in 2005. He also made a documentary in tribute to his mother called Gathering the Scattered Cousins, selected for screening at the prestigious Toronto Film Festival in 2006.

He was awarded the 2007 Standard Bank Young Artist Award in the Film category.

He is a familiar face on the South African small screen having starred in Isidingo, Generations, Double Shift and Big Okes.

In 2008 he joined the cast of the M-Net drama series Jacob's Cross for its third season playing the role of Femi, a UK-schooled and educated ex-Nigerian who arrives in Nigeria with a major secret.

Tell Me Sweet Something is his new movie, a romantic comedy set in Johannesburg. Written by Omotoso with producer Robbie Thorpe, it stars Maps Maponyane, Thomas Gumede and Nomzamo Mbatha.

Vaya is a 2016 South African drama film directed by Akin Omotoso. It was screened in the Contemporary World Cinema section at the 2016 Toronto International Film Festival. Overall the film received 10 nominations.