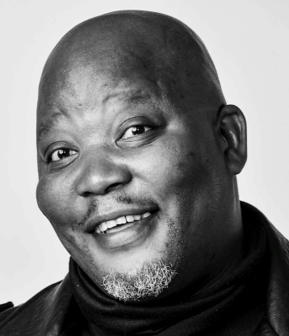 Kenneth Nkosi is a South African actor best known for his roles as The Pastor in the television drama ‘Gaz'lam’ and as Aap in the Oscar-winning film ‘Tsotsi’.

He also appeared in the 2007 mini-series ‘Society’.

Nkosi had his first taste of acting in community theatre. In 1993 he enrolled at the Market Theatre Laboratory in Johannesburg. He made his stage debut two years later in the comedy ‘Afrodizzia’ at the Johannesburg Civic Theatre.

He has worked on stage at The Civic and at The Market Theatre in a variety of productions and is a member of the South African Sports Company and a field worker for the Market Theatre Laboratory.

He is well known on television for his performances in the soap opera ‘Isidingo’ and in ‘Saints, Sinners’ and ‘Settlers’ and for his appearances on e.tv's ‘The Toasty Show’.

In 2011 he was one of the featured celebrities interviewed by Nicky Greenwall in ‘The Close Up’, which aired on E-TV and DStv's eNews channel.

That same year the movie ‘Otelo Burning’ was released, directed by Sara Blecher. Kenneth won an award for best actor at the ‘Colours of the Nile’ awards.

He also had a starring role as bumbling private investigator Boomba in the Mzansi Magic comedy series ‘Boomba and TT’, in 2012.

In 2013 he began hosting the ‘Mzansi Magic and Mzansi Wethu’ game show Wang Verstana, which tests how well engaged couples know each other.

In 2014 he was the host of the e.tv reality competition series ‘SA's Kitchen Queens’, in which six women - with the aid of celebrity mentors - face off each week in challenges for a grand prize, whilst being equipped with skills such as negotiating, budgeting and cooking.

He currently is on a local SA TV Series, ‘Greed and desire’.

In 2016, still in pre-production, Kenneth shot ‘Five Fingers of Marseilles’, directed by Michael Matthews, first of its kind out of South Africa, this film is sure to win many awards.

In 2017, he played the lead in the film, ‘He who is without sin’, written by actor Jafta Mamabolo (Jerusalema/Ayanda/Otello Burning), the project is a return to his collaboration with director Ralph Ziman (Jersualema, The Zookeeper).

He then went on to Leon Schuster in another South African favourite to hit box office, ‘Frank and Fearless.

Kenneth was also the brand ambassador for Multi-Choice for the last 3 years.