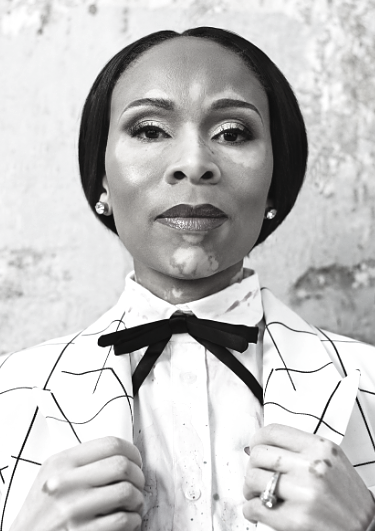 Leleti Khumalo is a South African actress best known for her leading roles in the feature films Sarafina! (1992) and Yesterday (2004); as well as for her role as Busi Dlomo in the SABC1 soapie, Generations, from 2005-2008. Khumalo was born in 1970, in Kwa-Mashu township, north of Durban.

Displaying a talent for performing arts from an early age, she joined a youth backyard dance group called Amajika, mentored by Tu Nokwe. In 1985 she auditioned for Mbongeni Ngema's musical, which later became the international blockbuster Sarafina!. Ngema wrote the lead character of Sarafina, especially for Leleti. She enchanted audiences both in South Africa and on Broadway, where she received a Tony Award nomination for Best Actress. Sarafina! had a Broadway run lasting two years, after which the production embarked on a worldwide tour.

In 1987 Leleti received an NAACP Image Award for Best Stage Actress. In 1992, she starred alongside Whoopi Goldberg in Darrell James Roodt's film version of Sarafina!, which was distributed worldwide, and became the biggest film production to be released on the African continent. Again she was nominated for an Image Award, together with Angela Bassett, Whoopi Goldberg and Janet Jackson.

In 1993, Khumalo released her first album, Leleti and Sarafina. She also co-starred in Mbongeni Ngema's international hit musical Magic at 4 AM, which was dedicated to the legendary Muhammad Ali. She subsequently starred in Ngema's musical Mama (1996), which toured Europe and Australia. In 1997, she also starred in Sarafina 2. Khumalo moved into dramatic acting with the play Koze Kuse, written by Sello Maake Ka-Ncube.

She then featured in Darrell James Roodt's film Cry, the Beloved Country (1995) based on Alan Paton's novel, produced by Anant Singh and starring Richard Harris and James Earl Jones. Leleti also appeared in the television series The African Skies and in a number of television commercials. She was also acclaimed for her role in The Zulu (1999), written and directed by Mbongeni Ngema, about King Cetshwayo and the Battle of Isandlwana, fought during the Anglo Zulu War. In 2000 she was awarded an acting diploma by the Mbongeni Ngema Academy of Performance Excellence. In 2003, Khumalo starred in the musical extravaganza Stimela SaseZola at the African Bank Market Theatre in Johannesburg. In addition to her role in Yesterday, Khumalo starred in the 2004 film, Hotel Rwanda with Don Cheadle and Nick Nolte. In 2005 she played the title role in the Darrell Roodt film Faith's Corner.

In the same year, she joined the soap opera Generations as the character Busiswe Dlomo, the sister of power-hungry businessman Ngamla (Menzi Ngubane). Khumalo - along with co-star Camilla Waldman - was fired from Generations in October 2007, after producers decided they had to axe some established actors to make way for new faces on the show. Her last appearance on the show was in June 2008. She played the role of Flo Raphoto, the aunt of Themba, in the SABC2 mini-series Hopeville, from March to April 2009. In 2011 she played the role of Grace in the eleventh season of the SABC1 AIDS drama series Soul City. In 2015 she had a starring role as Zandile Mdletshe, the matriarch of the Mdletshe family, in the SABC1 telenovela Uzalo.

In 2018 she joined e.tv Telenova Imbewu: The Seed, in which she plays the character MaZulu, a housewife married to an oil tycoon, Zimele Bhengu.