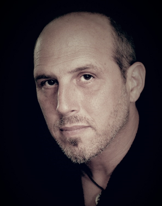 Waldemar Schultz grew up in blissful suburbia near Cape Town, where he showed a great love for acting since playing a piece of seaweed in the chorus of The Coral King in Sub A. This love eventually ripened into a career choice, and led him to study at Stellenbosch where he completed a Master’s degree in Drama, and taught acting from 1992 to 1994, with the additional odd bit of ad hoc teaching at the university and in his wife's drama school over the years.

During his time as a student at Stellenbosch, he was recipient of the prestigious Fleur du Cap theatre award for the Most Promising Student (as well as two nominations in previous years for the same award), and was also awarded the sought-after University of Stellenbosch Drama Department’s Dux Prize for the highest standard of work upheld over the course of four years' study for a degree in drama.

While still a graduate student, he began a freelance career in voice dubbing and radio dramas for the SABC, and would eventually go on to become a dubbing director. Between 1991 and 2001, he also busied himself acting in and/or directing (and sometimes even writing) many theatre projects.

His first role in a television series was as Klein-Geoff in the 1994 series, Woestynblom, followed by Paul Kruger in the CCV youth drama Young Vision. Smaller cameo roles in Hagenheim: Streng Privaat,  Soutmansland and Arsenaal amongst others followed, with most of his time being taken up with voice work, corporate and children’s theatre and commercials until, from the year 2000, his role in 7de Laan became more-or-less a full-time occupation for 9 years. Since he moved back to the Cape in 2008, he has busied himself with several theatre projects, interspersed with voice, commercial, film and television work including international films such as Black Butterflies, The Kissing Booth, Game Changer, Cold Harbour, Life's a Beach and The Last Resort, and appearances in local films Snaaks Genoeg, Lenteblom, Felix and Modder en Bloed. His TV work includes international series' such as Infested 2!, Dominion, Hooten and the Lady, Troy: Fall of a City and Silence Is Deadly. Locally, he has kept busy with series' such as Stokvel, Vloeksteen, Oupa en Ouma, Treknet, Die Boland Moorde I & II, Fynskrif, Suidooster, Proesstraat I, II and IV, Die Byl I & II.

He was awarded, along with the cast of Proesstraat, a SAFTA award for Best Comedy Ensemble, and was voted Actor of the Year by the Huisgenoot Tempo Awards for his role in Die Byl I.

He was married in 1996 to Ira Blanckenberg. They met as students in Ira's first year, but it was not until her final year when he was a post-graduate student (and, in a very roundabout way, one of her lecturers) that they at last "found each other". She is a drama teacher and freelance actress.

Waldemar has few hobbies: he enjoys photography, but will never proclaim himself to be any more than an enthusiastic amateur in the field. He rides his bicycle when guilt manages to scream louder than laziness. He once loved computers, which provided him endless hours of entertainment and frustration, in equal amounts... but his enthusiasm for computers has more recently been replaced by a preference for the convenience of his beloved tablet. He is a self-confessed gadget-queen, and frequently deeply laments not having nearly enough toys with which to play. He is plagued by the knowledge that he will have to grow up one day, but fervently hopes it will not be too soon.