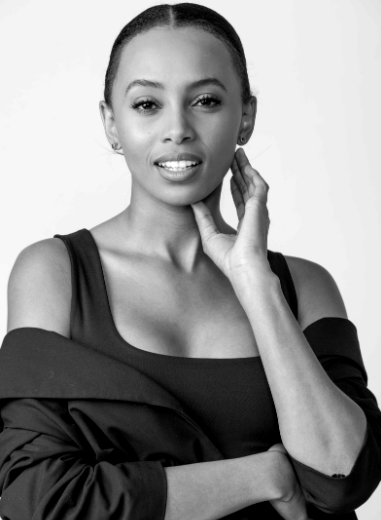 Celeste Khumalo is an effervescent power house who hails from Johannesburg, South Africa. She is an individual that thrives in the entertainment industry as an actress, model and brand ambassador and MBA student. She’s affectionately known as Bulelwa on one of South Africa’s top soapies with 9million viewers - Generations The Legacy, she played Linda on The Queen, Kholwa on the record-breaking online hit tv series, The Girl from St Agnes a Showmax original directed by Cindy Lee and Catharine Cooke, as well as record-breaking South African first Netflix original series Shadow.

She was crowned Miss SA Teen 2011 and was the last to reign under this prestigious title after a successful year of youth ambassadorship, she went to further her studies and obtained BA in Corporate Communication. Beyond entertainment. Ms Khumalo is an entrepreneur and has a deep passion for social development & education. She currently is part of a list of 100 influential women in different sectors of the country for the Woman of Fortitude Campaign which was inspired by Ma Albertina Sisulu and commissioned for the first time to mark her’s as well as Nelson Mandela’s Centenary.

Having worked with various charity organizations and corporations to identify and address issues that deal with creating a Look Book 04 March 2019 better society, she has been working on projects that will soon come to light that she believes will assist citizens of the Country in progress towards a Better South Africa. Recently she’s handed over school shoes and backpacks with the former Minister of Energy, Jeff Radebe in KwaZulu-Natal in a back to school campaign that assist and encourages disadvantaged children with their educational journey. She Visited Mkomaas, a rural village in KZN to identify a school that requires upgrades especially basic needs such as refurbishment, ablution services and early childhood development interferes that hinder or interrupt the schooling journey for disadvantaged children. She has since identified a school and has begun working with an NGO to address the schools needs. Celeste is also an entrepreneur. She’s a self-starter with an open mind and heart.

She opened her first business in 2015 – Republic Nails, a nail bar in Hatfield, Pretoria and her second bar in Melville at the end of March 2016.

After a three year run and due to career changes as well as the need for self development at the time she closed down both branches, took up an MBA and has been pursuing her passion for acting. With the spirit of entrepreneurship, the new ventures she’s currently working on aspires to create more jobs for women. While she lives for her passion for film, she’s writing with the intention of getting into the production space of film.

She’s got also got her eyes set on the textile industry and is still developing the business. Understanding that not everything is received or given at face value, with her education backing her and her hard work and integrity she is confident that she can assist others to find their success.

Celeste is open to social development, business opportunities, even those which aren’t necessarily in the beauty industry. Look Book 04 March 2019 Being very active in the community where she ran her nail bars Celeste has been a guest speaker and shared the podium with the Vice-Chancellor, Cheryl de la Ray, at The University of Pretoria’s Golden Key Society, the Woman of Worth High Tea and actively showed her interest in education by marching in solidarity with the students of the university for the #FeesMustFall movements.

Celeste loves to travel having visited Thailand, Germany, Austria, Italy and the United States, Zanzibar, Zimbabwe, Swaziland, the UAE and Indonesia. She loves to go site seeing and learn about the history and culture of the countries she has visited.