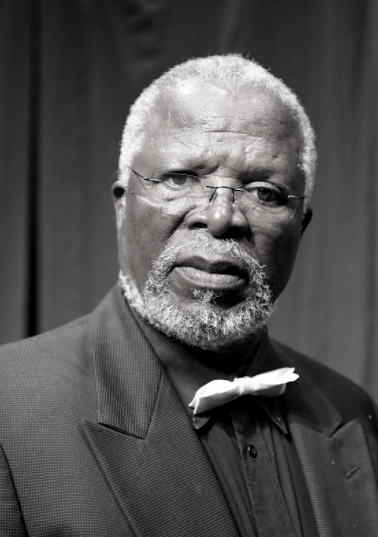 Besides his appearances with Stratford-upon-Avon’s Royal Shakespeare Company (”The Tempest,” “Hamlet,” “Kunene and the King”), his London-area theater credits include “Sizwe Banzi Is Dead,” “The Island” (Evening Standard Award nomination), “Waiting for Godot,” “Master Harold and the Boys,” and “Playland.”

Additionally, he has transfixed audiences in his home country, South Africa, at The Fugard Theatre (“So Ry Miss Daisy,” produced by Saartjie Botha; “Kunene and the King”) and The Baxter Theatre Centre (“Antigone”) in Cape Town, as well as Johannesburg’s Market Theatre (“The Train Driver,” “The Blood Knot,” “Driving Miss Daisy,” “The Native Who Caused All the Trouble,” “Othello,” “The Lion and the Lamb,” “Sizwe Banzi Is Dead,” “The Island,” “Waiting For Godot,” “The Death of Bessie Smith,” “Playland,” “Duet For One,” “My Children! My Africa!,” “Hedda Gabler,” “The Dance of Death,” and “Ladies and Gentlemen, Shakespeare!”)

On television, he has acted in Wallander and Inkaba (which he also created). Kani’s filmography includes The Wild Geese, The Grass Is Singing, Marigolds in August, Victims of Apartheid, An African Dream, Option, A Dry White Season, Sarafina, Saturday Night at the Palace (Taormina International Film Festival’s Golden Mask), Kini and Adams, Ghost and the Darkness, The Tichborne Claimant, The Final Solution, The White Lion, The End Game, The Suit, Coriolanus, How to Steal Two Million, Captain America: Civil War, Black Panther, Murder Mystery and Disney’s 2019 remake of The Lion King (voicing Rafiki).

His directing resume includes numerous theater titles (“Goree;” “Blues Africa Café;” “Kagoos;” “The Meeting,” at The Market Theatre; “The Bacchae;” “Friday’s Bread on Monday,” “Sellout,” “The Last Bus,” and “The Cure,” at The Serpent Players). In 2008, he made his film directorial debut with an adaptation of his play “Nothing But the Truth.” The feature claimed the Silver Etalon de Yennega at the Ouagadougou Panafrican Film and Television Festival.

Countless awards and honors have been bestowed on Kani throughout his extraordinary career, among them honorary doctorates from the University of Durban Westville, Rhodes University, The University of Cape Town, and Nelson Mandela Metropolitan University; the Hiroshima Peace Culture Foundation Award; and the Fleur du Cap Theatre Award for lifetime achievement. In 2005, he received the Order of Ikamanga from the President of the Republic of South Africa, recognizing his contribution in the struggle for the liberation of his country through his work in the arts.

Kani is a patron of the Market Theatre Foundation; in 2015, MTF christened the main theatre in his honor. In 2017, Whites Road in Port Elizabeth, South Africa’s city center was renamed John Kani Road. The following year, he took home a gold medal from the Kennedy International Committee on the Arts. Kani is also the recipient of the prestigious Sortugui Afrique Cinema Honor in Burkina Faso. Most recently, he was awarded the Voices in Freedom Award by Shared Interest, in New York. Previous recipients include Nelson Mandela and Bishop Desmond Tutu.