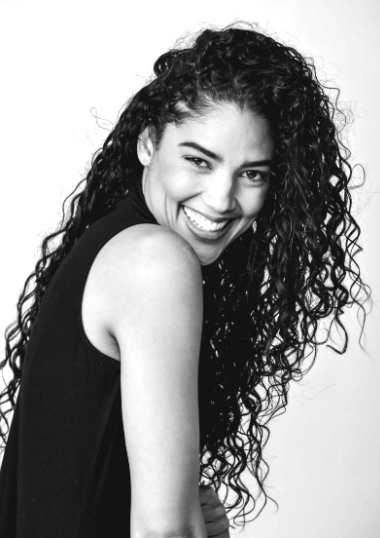 Shamilla Miller is a talented actress who graduated with a Bachelors degree in Film and Live performance from AFDA School of Motion Picture. Thereafter she spent a few years moulding her craft on stage with the likes of David Kramer and Alfred Rietman where she played the female leads in the productions ‘Krismas van Map Jacob’s’ 2009, 2010 and ‘Baby’ 2010

Shamilla then teamed up with Vulture Productions from 2011-2015 where she was a part of five ‘sitcom style’ plays that showed at the Artscape Theatre and Grahamstown festival repeatedly.

After a string of commercials, she landed her first lead television role in 2013 in the youth drama series AMAZA where she played a young Muslim girl named Ayesha that had a strong passion for surfing. Thus launching Shamilla’s television career.

That same year she also debuted on international screens when she landed a role in the action packed feature film Zulu, where she played opposite Forrest Whittaker.

In 2014 Shamilla tried her hand at presenting, which admittedly is not her strong point. She did a kids TV show called challenge SOS where schools competed against each other in obstacle courses for glory.

In 2015 Shamilla played the very sexy seductress in the show ‘forced love season 2‘ where she was challenged to drop her girl next door persona and show a more sultry side.

2015 and 2016 were big years for Shamilla. She appeared in a string of short and feature films both local and international. In the shorts she played the female leads in ‘kleingeld’, ‘As ek huistoe kom’ and Nommer37. For Nommer37 she won best actress for her role as Pam at the Mzanzi short film festival.

In her local features she worked with the amazing Maynaad Kraak from West side films on the films ‘Finders keepers‘ and ‘Sonskyn Beperk.

Internationally at that time she appeared in more credits like ‘Bock to school mom’ where she played alongside Kimberly Elise and Loretta Divine as well as an episode of ‘Hooten and the Lady’ Where she shared the screen with Micheal Landes.

To end off 2016 Shamilla took the leap and moved from Cape Town to Johannesburg where she started in the soap opera Isidingo as  the loud mouthed, childish, drug smuggling convicted criminal, Daniella Scott.

2017 started off with the last season of Z’bondiwe where Shamilla played the head of a security detail named Hilda. Shamilla also performed all of her own stunts in the fighting scenes.

That same year Shamilla landed the role of ATHENA THE GREEK GODESS in the BBC epic 8 part drama series Troy: fall of a city.

2018 saw Shamilla rewinding the clock as she found herself playing 17 again. First in a crime drama series where she played the colonels daughter named Anya and then again in Showmax’s first original ‘whodunit’ murder mystery drama where she played she suspicious schoolgirl named Jenna

In 2019 Shamilla landed a role in one of the first South African Netflix originals ‘blood and water’. A drama where she played pregnant for the first time and had to deal with school scandals.